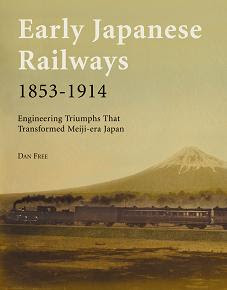 When we received Early Japanese Railways by Dan Free, we weren't quite sure what to expect. Would this oversized 288 page book be a tech-heavy examination of the nuts, bolts, and hardware involved in railroad building, heavy on the industrial jargon and light on history? Perhaps an examination of the cultural, economic, and political implications that the railways had on Japan? A collection of anecdotes and travel diaries? A coffee table book backloaded with photos and prints? Well, after an in-depth examination, it seems that Free has managed to pull off something special-a book that combines all of the above features and manages to do them justice. It's an impressively well written and even more meticulously researched work that Free has spent 25 years working towards, and a welcome new addition from Tuttle Publishing.

The book begins by dividing the timeline up into themed chapters: The Introduction Of Railway Technology (including the initial rail concession by the Tokugawa Shogunate to the United States), Intrigue, Influence, and Incompetence (the early days of British dominance of the Japanese rail industry and the planning phase of the Meiji rails), Building the First Railway (Yokohama to Shimbashi in Tokyo), Kobe To Kyoto (the first rails in central Japan), Otsu, Tsuruga, Nagahama and East to the Nobi Plain (as the network becomes more connected), Expanding and Integrating the System (more of the same), The Second Railway Mania and the Russo-Japanese War, Nationalization and Self-sufficiency, and Tokyo Station (the final link in a rail system stretching from the north of Hokkaido to the south of Kyushu). Particularly interesting to Samurai-Archives readers will be the early chapters where the political double-dealings and diplomatic blunders committed by both the Japanese and Western powers are laid out in impressive detail.

For instance, the Shogunate's rail concession to the United States (although legally binding to the Meiji government) was seen as something to be negated by the former enemies of the Tokugawa who now found themselves in power. Using the time honored Japanese techniques of stalling, failing to reply to diplomatic requests, and not addressing any of the real issues when a reply was given, the Japanese diplomat Sawa Nobuyoshi ran rings around American diplomat Charles DeLong, taking full advantage of his inexperience in the world of international relations. Instead, seasoned politico Harry Parkes of Great Britain managed to maneuver his country into overseeing and supplying (at great benefit to the coffers of English businessmen) the embryonic Japanese rail industry. Closely tied to this are the examinations of the effect of railways on the Japanese economy, and how it in turn aided the rapid development of other industries. Initially relying on foreign suppliers and engineers (not to mention cash strapped by the extravagance of British construction methods), the development of Japanese engineering and the eventual replacement of foreign experts and suppliers by 'home-grown' ones shows that the long term goal of 'sonno-joi' activists years before actually did see the light of day. In fact, Japan turned the tables, being a major exporter of rail expertise and supplies to its Asian neighbors. It's also shown how the former samurai class managed to stay among the ranks of the elite by using their government buyouts to become one of the biggest investors in railroads. The hand in hand relationship of Japanese industry with the government is shown in the switch from a national railway system to private industry and back again. The increasing dominance of the military in the political sphere can be seen by the growing influence of the army in rail planning decisions.

The effects on the culture of Japan are well documented as well. A national network of rail lines that connected every province had wide reaching repercussions, encouraging travel, trade, and nationalism. Electric lines, tram cars, and the fascinating Jinsha Tetsudo (commercially viable railways operated by manpower) are also examined in detail. Many of Japan's hot springs became famous during this era as these low cost options made them accessible to everyone. With railways and industrialization came more disposable income and a higher standard of living for the Japanese people. The special 'Imperial Trains' of the Meiji Emperor are also given a detailed examination. When the text threatens to become bogged down with facts and details, Free is always ready with an amusing story to break things up. Whether it's a fussy English traveler's complaints about trainboard amenities, early field surveys being thrown off by the refusal of samurai to remove their swords (the metal threw off the calibrations of the instruments being used), or former American President U. S. Grant being chased down a corridor of Shimbashi station in 1878 by a crowd of girls (seems Grant was the Brick McBurly of his day), Free never forgets the human side of railway development.

That's not to say there isn't plenty of technical information. Free has done his homework and if you want to know what company built what line, where it ran to, what the rail gauge was, what their company shamon looked like (along with the visual puns on kanji they incorporated), the arrangement of the running lights, the technical specifications for the locomotives and rolling stock, numbering schemes, and virtually anything else, it's a good bet you'll find it within these pages. Free has taken care not to let the hard information dominate the book, as much of this is related in picture captions and in the amazing compendium of information in the book's appendix (which also includes a helpful list of 'Dramatis Personae' with short biographies of the major players, a Japanese railway/geography lexicon with kanji, and notable documents pertaining to the rails in the political arena). That being said, one area that the book falls short in was not including a simple line drawing of a representative locomotive with rolling stock labelling the different parts of the machinery with an explanation of each part's function. As the book is aimed at a general as well as a scholarly audience, many readers will be in the dark about what many of the things being talked about mean. While most readers will eventually come to know what a '4-4-0' locomotive is, they'll be left scratching their head the first time they see it. Overall, though, Free does a good job of explaining the evolution of locomotive design and also the differences in the British, American, German, and (later) Japanese designs that were used.

The book would be perfectly capable of standing on its own as a picture book. It is loaded with quality photos and prints, both in color and sepia. Free gives these the same care he shows the rest of the book, with detailed captions pointing out things going on in the photographs that are easily missed. Any train enthusiast would be thrilled to have this book on the basis of the images and the appendix alone.

Finally, the quality of the writing and the research behind it is superb. The bibliography, although containing only a handful of Japanese works, is extensive. Free submitted his manuscript to Aoki Eiichi (famous Japanese rail historian) for review and comments, and solicited help in securing information from many museums and individuals within Japan. Unlike many books aimed at a general readership, you'll find few, if any, factual errors within its pages. How meticulous is Free? So meticulous that his book listing on Tuttle's website includes an errata page detailing the few grammatical errors made within (not that there are that many-you'll probably find more just within this review). If every author took the care that Free shows, there would be a lot less eye rolling on the Samurai Archives.

Whether one has a scholarly interest in the impact of railways on development of the Meiji era or enjoys being a dedicated 'train spotter', they'll find a lot within these covers to keep them busy. As we read through the book, it struck us that the history of the rail industry in the Meiji era was a metaphor for the country as a whole-a sentiment Free shares in his concluding remarks. "Few would be able to find a better-suited microcosm more emblematic of the development of the Japanese nation as a whole during the Meiji reign". Early Japanese Railways is a rare example of a work that combines technical excellence and a plethora of information with a lively writing style that always gives the human element its due. Combined with an excellent graphical presentation of hundreds of rare photographs, advertising material, timetables, maps, woodblock prints, and postcards, the book provides a fascinating glimpse of Japan as it moved from self-imposed seclusion to being the 'most Western of Eastern nations'.

Early Japanese Railways: 1853-1914 is available through Amazon at the Samurai Archives store HERE. We'll also be running an interview with the book's author, Dan Free, within the next month or so.